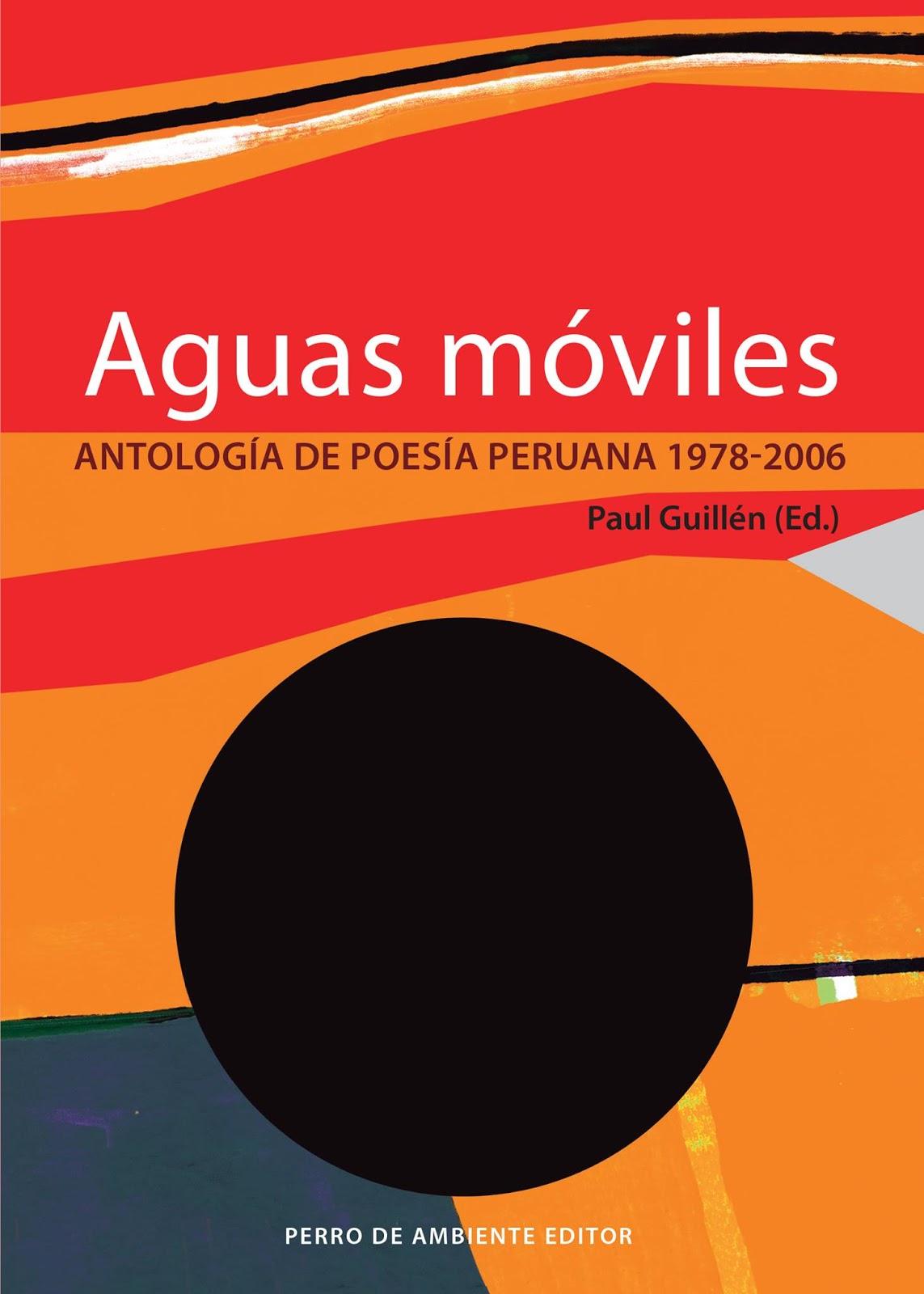 Aguas móviles is an anthology that gathers the voices of Peruvian poets born between 1952 and 1982, who began to publish their first books between 1978 and 2006. Put a different way, it contains the poetic product of the eighties, nineties and early twenty-first century. The selection is organized with a questioning attitude towards the idea of “poetic generations”, a notion that conglomerates a group of people under criteria that are often inconsistent or disjointed. Paul Guillén appeals to the continuity of time, which permits him to develop a procedural reading of the fluctuations, constants and variables of Peruvian poetry. 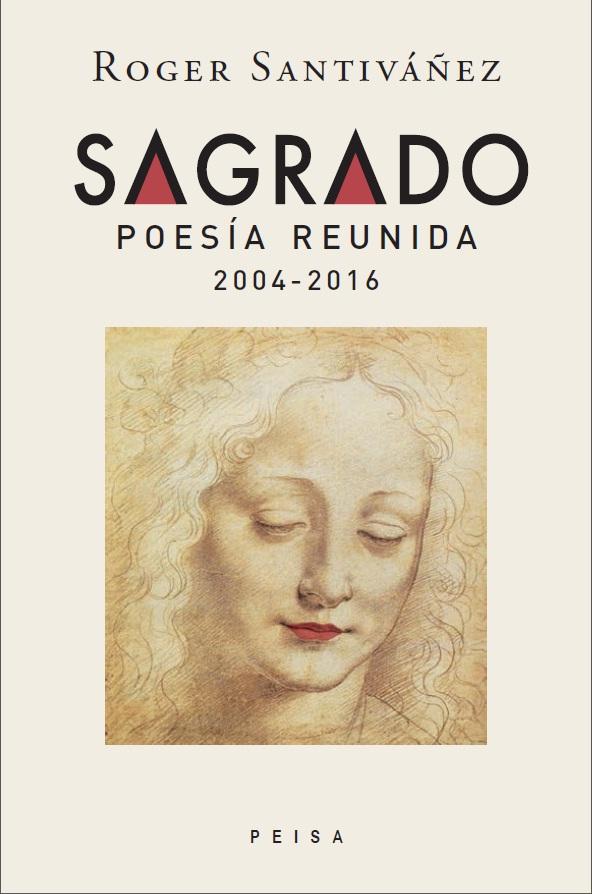 Sagrado unites the poetic works of Roger Santiváñez written between 2004 and 2016. It also includes some poems from as early as 1979 and 1999. Ever since his first work, Antes de la muerte, emerged in 1979, Santiváñez has built a poetic style defined by one of the most important voices in Peruvian poetry. His work makes us participants in a universe in which the search for harmony and equilibrium comes through the transgression born of a skeptical perspective. 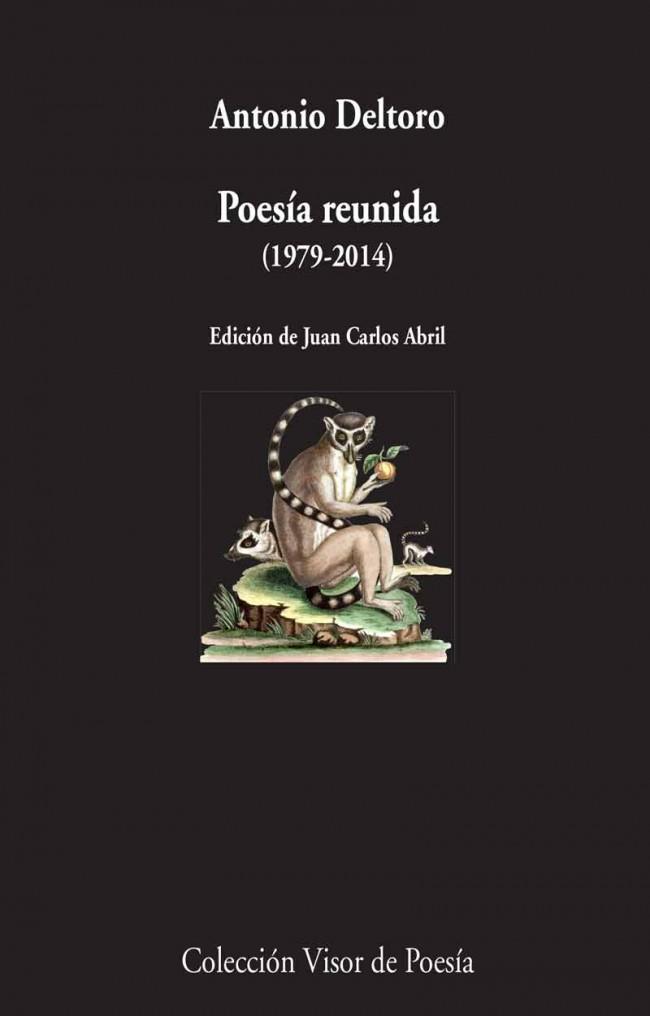 When one reads the poetry of Antonio Deltoro, an inner peace is installed of that sort that makes us better; better able to see the secrets of a world that pulses with life and the anonymous people that are so similar to us; better readers of emotions and sunsets.

The leader of poetry presented through a slower lens, focused upon the ordinary, upon a dynamic experience that has not been extinguished in his seventy years of life, to read a poem by Deltoro may well be to read the poet himself. It produces a sensation similar to that which surges when the light falls upon a wall “without anyone to obscure it”; to reference another of his poems, it is like “The sun in an empty room”. 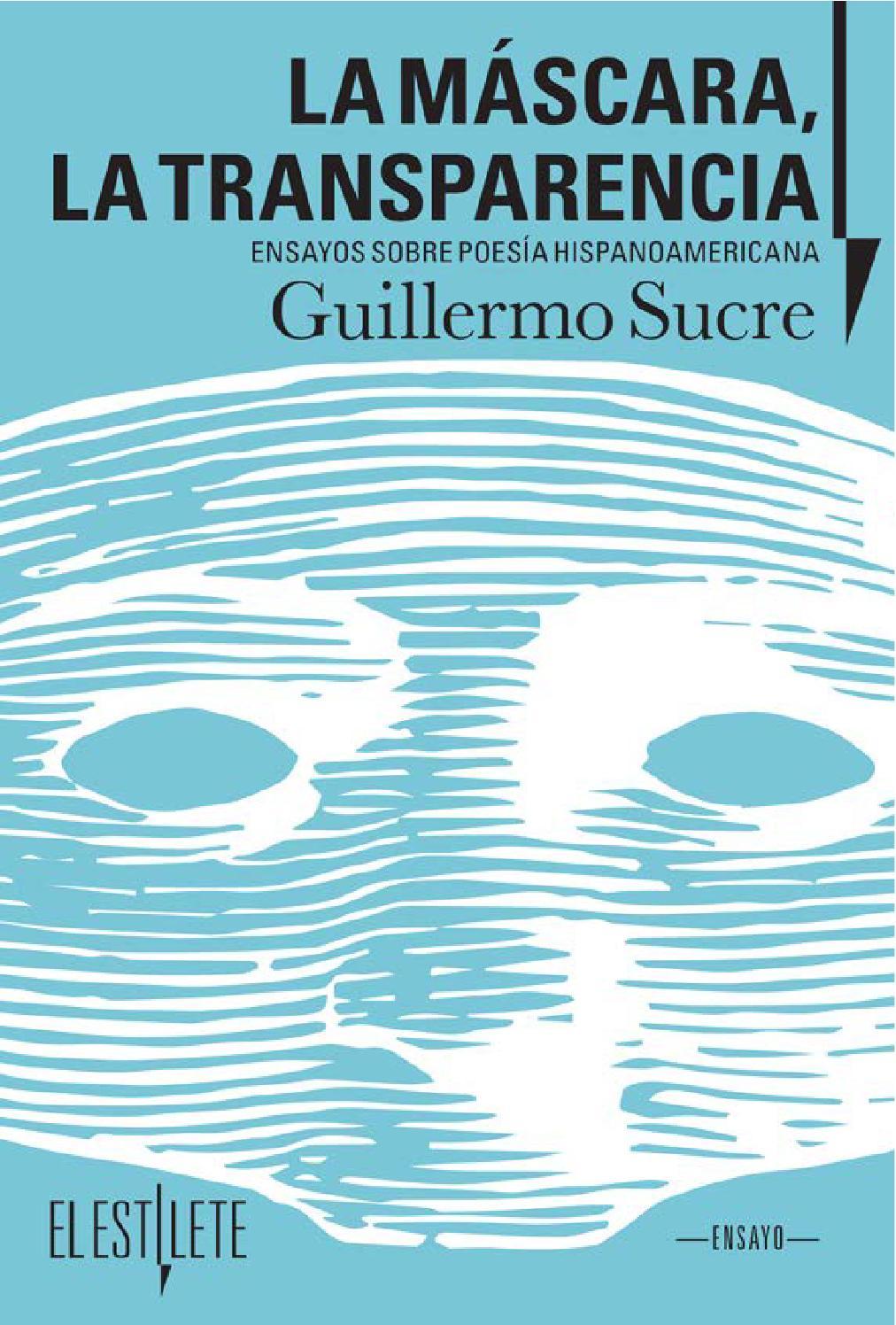 In La máscara, la transpariencia, Guillermo Sucre presents a rigorous, sober and above all poetically conscious work. That is to say, it focuses more upon the texts than upon their authors. For that very reason, he says, he chose that title: taken from José Lezama Lima, the image reveals the possibility for a poet to make him or herself invisible, allowing their poetry to speak for them.

The selection of works favors not a preconceived notion “the representative”, but rather that which the author considers the character hispanoamericano: “Its quests, its obsessions, its conscience of reality and of history, its fascination with certain myths, and the continuous passion for a utopian world.” 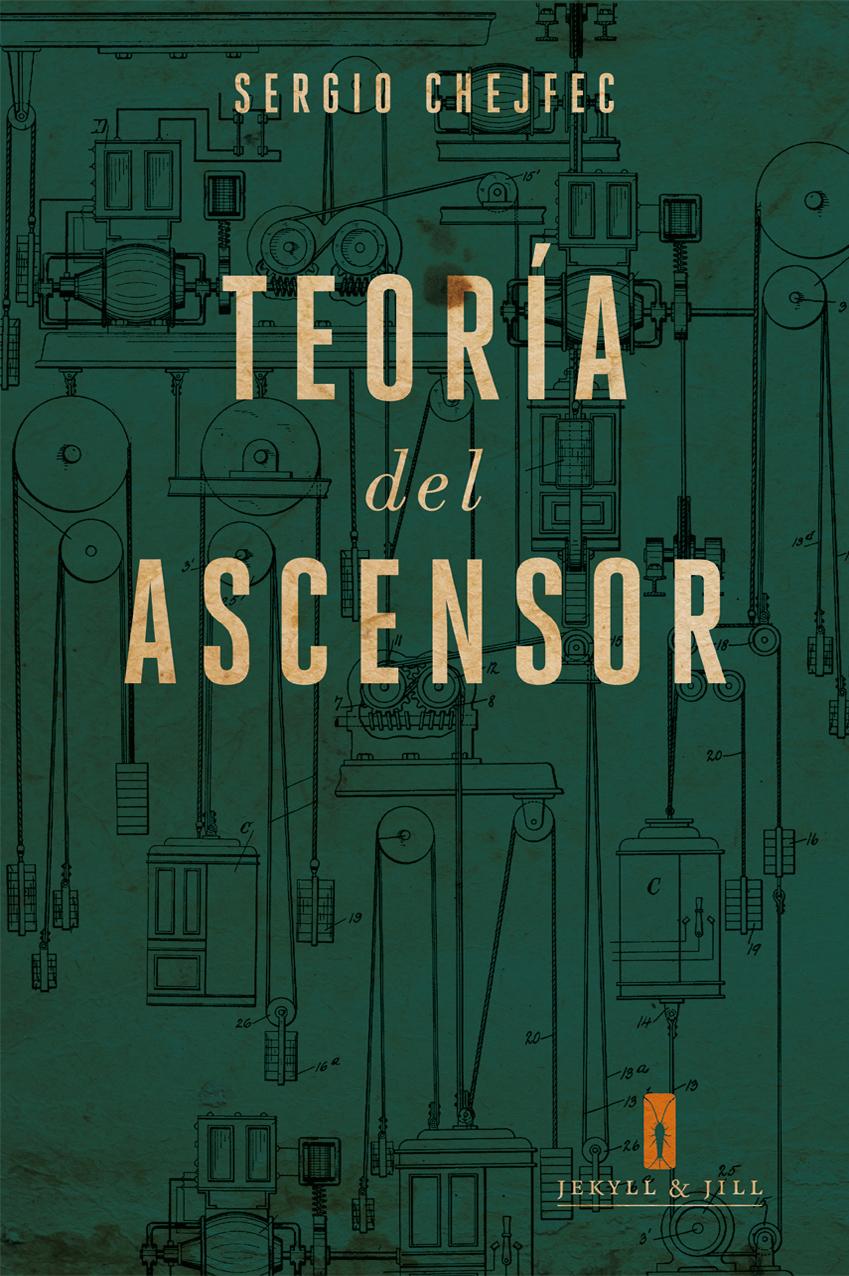 The texts that make up this volume, despite being heterogenous, are leveled by that impersonal yet incisive tone, dispassionate yet intellectually moving, that characterizes Chejfecian prose. In that sense, it is a disordered diary with no dates, which murmurs a narrative of occurrences, ideas, reflection, literary criticism and fleeting anecdotes that converge in the vital itinerancy of the author. 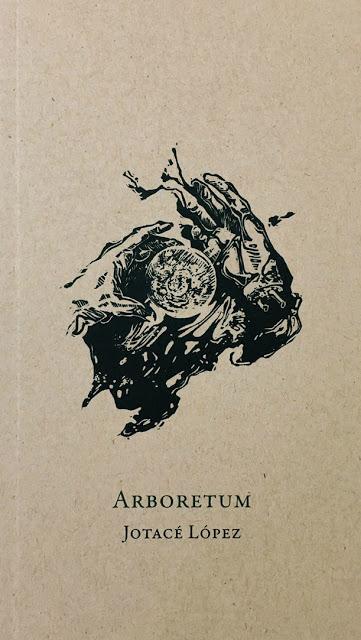 A member of the mountain guard relates his experience along with a powerful future foreman, all while he emerges from a semi-conscious state brought on by asepsis in the hospital. He has survived a whirlwind of intrigues, the traffic of human extremes and suppositions, all scrambled together on an island strictly ruled by the Corporation, an entity of which he once felt himself a part.

A mother and her child, held back by a tense relationship that moves between regret and tenderness, feel trapped in a world where environmentalism, manipulated by misinformation and powerful men, achieves precisely the opposite of its aims. He turns a blind eye to their circumstances, all while decidating himself to spying and attempting to trap an antiquities trafficker. Meanwhile, he dicovers that the Collision Space Agency, the financier of his misión, is searching for four pieces of the remains of an imperial palace in India. From the pieces a legend has grown; one of them is found, it would seem, very close to the mother. She, having been an environmental activist, throws herself into the investigation of the catastrophe in which she lost her younger daughters.

Arboretum, a book composed of only two stories, manages to assemble a futuristic world on an island curiously similar to Puerto Rico, terrifylingly related to the discernible possiblities resulting from the socioeconomic conditions that are actually present. Human exploitation carried to the very worst of extremes, absolute control of the means of subsistence and health in the hands of a state-corporate hybrid, an intentional shortage of available information coupled with the trafficking and sale of facts manipulated by a government aided by a sort of mafia that silences any dissenting movements are all among the elemnts that sustain the world of Arboretum. Through the two impecable plotlines, which are interspersed with the occasional novelistic touch, these stories show us that the terrible components of humanity are repeated continuously throughout time. To borrow a phrase from the author, perhaps that is what renders humanity so marvellous.

This surprising work by Braulio Fernández Biggs unites fourteen short stories into one collection. The element of surprise - not necessarily a merit - flourishes at the flanks, keeping the reader spellbound with a strange and fascinating brand of distress.

Of course, each text (as well as the collection in its entirety) presents a risk for the reader, on the border of the experimental. The reader ought not to expect a traditional anthology of stories, ruled by the old structure of buildup, climax and denouement. Nothing could be further from the nature of the stories told by Fernández; these tend to weave evasively, crafty and fragmented. Nevertheless, there is a constant effort at lending the work a sort of unity, albeit horizontal. Characters, places and episodes are repeated from one story to the next in such a manner that one might suppose that a second plot exists behind the first. Even so, that second plot does not have superior support or visibility compared with each story on an individual basis. There is, however, a “Coda” at the end which, though moderately, ties up some loose ends, resulting in a retrospective resonance.

Fernández Biggs does not make it easy for the reader. On one hand, this is because the stories are full of ellipsis and suggestions that each reader should complete with his or her own imagination, along with their repertoire of readings and experiences. On the other, the text contains a sequence of preferred quotations taken from the Anglo-Saxon literary tradition. In its own way, this reveals an adopted affiliation, which either emerges explicitly or hides, camouflaged in the creases of a story. 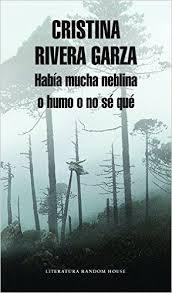 In this fascinating and experimental book to which it is difficult to assign a genre, Rivera Garza weaves a highly personal homage to the work and life of Juan Rulfo. He does so from a unique perspective, leaving a testimony and a confession: “Everyone has his or her private Rulfo. Mine, my Rulfo that is my own, is just as interested in producing a work as he is in making a living. ‘That fact is that I work’, he said once. In effect, that is what was happening. His jobs both for private interests and the federal government took him down long highways and through parts of the country that German modernity explored unceasingly with the end of identifying and exploiting their natural resources. To follow in his footsteps; that is what makes this travelling book, which goes between essay and story, from the chronical to the visual experiment, all while it moves from the central valleys toward the mountains that cross the state of Oaxaca. ‘¿Qué país es éste, Agripina?’; that question that the rural master casually throws at his wife upon arriving in Luvina – a zapoteco town perched in the sierra norte – continues to be just as valid today as it was then. Perhaps one begins a journy that way – sometimes in a car, but often on foot – in order to attempt, if not to answer it, to at the very least ask it again, then once more, in the midst of the violence that surrounds us.

Through the stories that make up this book, Fabio Morábito demonstrates that the normalcy of everyday life is anything but uniform. In his stories, the capacity to twist the course of the most common events with trivial details gives rise to extreme situations, where desperation and humorousness often go hand in hand. Above all, one observes the theme in the background of all of Morábito’s books: loneliness, with its sinister moments, and its islands of clarity. 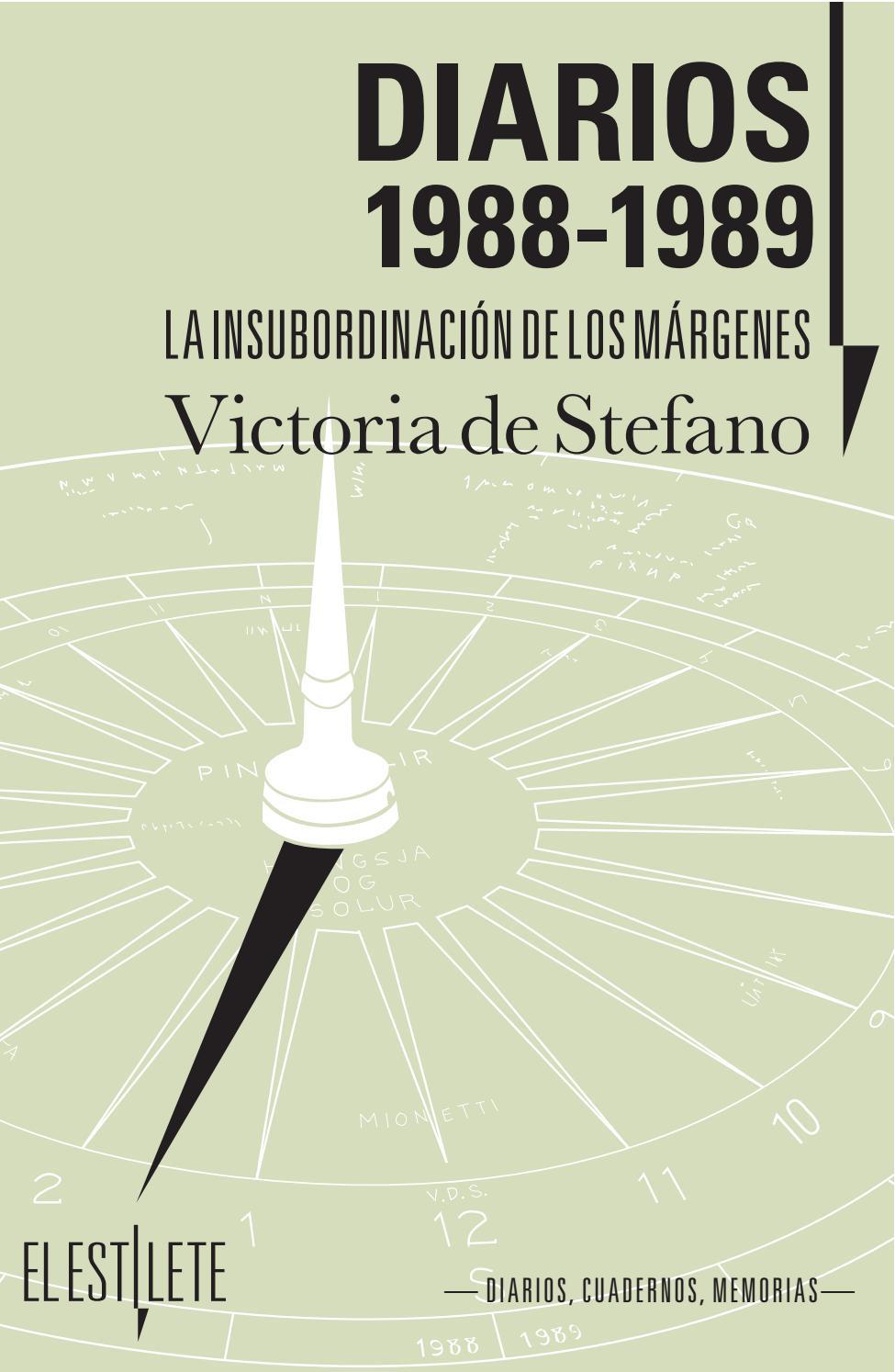 These diaries of the Venezuelan novelist Victoria de Stefano, written between February of 1988 and December of 1989, constitute a sort of registry and abreviation of reflections. Further, they include notes and annotations that touch upon the daily grind with writing itself, that literary chore. Family and friends, just like the problematic nature of the local social and political order (a wave of looting in the Venezuelan capital, once termed the “carcazo”) mark the work, just as do events on a global scale (the fall of the Berlin Wall, the Tianmen Square Massacre), among other affairs. Woven with a lucid and elegant prose, it is a reflexive and penetrating work. Stefano’s texts once again enter into evidence one of her greatest virtues, the achievement of a difficult combination: transparency and erudition engaged in the art of narration.

The second issue of Latin American Literature highlights the Caribbean and queer literature from across Latin America, featuring dossiers of revolutionary Chilean writer Pedro Lemebel and Mexican author Yuri Herrera as well as a special section on literary voices from Cuba.

"Three Visits to the Master" and Other Poems by Adolfo Castañón

"José Watanabe: From Everyday Reality to the World of Poetry" by Arcadio Bolaños
"The Profession of Darkness: Notes for a Biography of the Sleepwalker of the Contemporaries" by Diego Lima